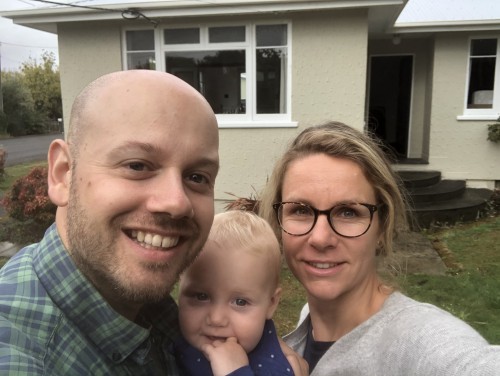 The timing could not have been better.

On the dawn of lock-down, last Wednesday, Ben Gill and Erica Buxton settled on their first home, moving into their two-bedroom abode in Greytown before the clock struck midnight.

The occasion was all the happier given the young family celebrated the move with a lower than expected mortgage rate.

The latest cinch in interest rates, resulted in a reduced floating rate mortgage of 2.8%, down from 2.95%.

"We feel very lucky to be in our new home in time. It's been a long journey as we relocated back from London in November last year - feels like we've been moving for a long time so great to put down some roots at last!"

Erica Buxton was an early adopter of Simplicity's KiwiSaver Scheme and entered her name in December ballot, drawn at the start of this year.

The first monthly ballot took place in November and has been running ever since. More than 120 names in total have been drawn with around 1,000 entries.

Despite the Covid-19 dramas swirling at settlement, Gill said the borrowing process itself had been smooth.

"The ballot was straightforward, and we started looking for a home once we found out we had been successful. The offer from Simplicity gave us the comfort we could realistically look at buying."

While mortgage rates in New Zealand are at record lows, Simplicity's floating rate remains the cheapest.

That fact that it doesn't punish borrowers for early repayment, also makes it hugely attractive.

Gill said the savings were tangible.

"The lower weekly payment means we can pay the mortgage off quicker, whilst also giving us the flexibility to pay a low weekly minimum if needed; this could be important given the ongoing uncertainty from COVID-19."

Simplicity's lending criteria is stricter than most. Repayments must work out to be equal to or less than 30% of after-tax income.

The maximum it will lend is 80% of the registered valuation of the home, or the sale price, whichever is lower.

There is no upper limit on how much it will lend, but it reserves the right to turn down borrowing for sums over $1million.

Ballot hopefuls must have been members of Simplicity's KiwiSaver Scheme for at least a year, on top of meeting the first home loan criteria for KiwiSaver.

Gill said he and Buxton welcomed Simplicity's lending rules as it demonstrated fiscal responsibility as well as encouraged borrowers to be smart with money.

"Simplicity applies prudent borrowing limits and conditions: they're not here to help you maximise your leverage! Therefore, you should consider the value of the house you wish to buy and understand what's actually affordable given your budget. "

Gill said his partner was an early adopter of Simplicity, joining shortly after its launch in September 2016.

"Erica joined Simplicity after reading some articles about the scheme launch, and we were interested in given Simplicity's early adoption of ethical investment principles and charitable donations from fees."

Simplicity donates 15% of its management fees to its owner, the Simplicity

Since inception, the Trust has donated more than $850,000 to Kiwi charities, most recently distributing $50k to agencies helping those most affected to the Covid-19 outbreak.

Asked what appealed most about Simplicity's model, Gill said it came down to the human touch.

"We like being treated as individuals and valued customers, as opposed to a profit and loss line on someone's books, and it's nice to know that it's a win-win for both us and Simplicity members.

"It's not every day the CEO calls you to congratulate you on your new house!"

Simplicity, to date, has approved $15 million worth of first home loan mortgages, however, this is the first to settle.