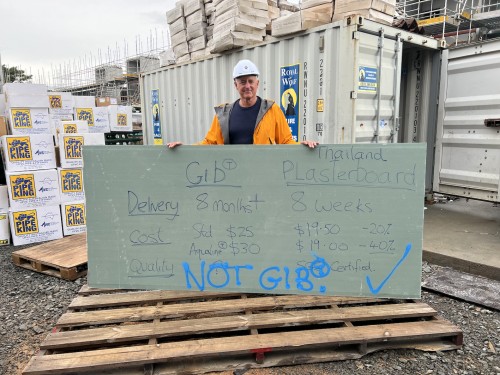 Simplicity Living, owned by funds managed by default KiwiSaver provider Simplicity, has cancelled all orders for Fletcher Building supplied GIB board, and is directly importing high quality plasterboard for its build to rent homes.

Standard GIB plasterboard is priced at $25 a sheet. Simplicity Living is having the equivalent imported and delivered onsite for $19.50 i.e. 20% lower. The equivalent of GIB Aqualine is being imported at a 40% lower price.

The first container recently arrived onsite from Thailand, 8 weeks after being ordered. Simplicity Living has forward ordered four containers a month for the next three years.

The imported plasterboard is widely used in the United States and Pacific, and will be used in the first 550 Simplicity Living build to rent homes in Mt Albert, Mt Wellington, Pt England and Onehunga.

"There's a cost of building crisis in New Zealand, and the hubris of Fletcher Building is only making it worse. So we're doing something about it," said Shane Brealey, Managing Director of Simplicity Living.

"It's tragic that it takes only 8 weeks to get much needed plasterboard from South Asia, but 8 months from South Auckland,” said Mr Brealey.

"By looking at building consents, Fletchers must have known there would be a shortage of plasterboard at least 12 months ago. So why aren’t they doing what we’ve just done?" he said.

Without adequate supplies of plasterboard, it is effectively impossible to finish many homes.

"And given that Fletcher Building controls 94% of the plasterboard market in New Zealand, they have a position of privilege.  With that comes responsibility, and they haven’t exercised that,” he said.

"It’s just crazy that we have to import a product as basic as plasterboard to build desperately needed homes on time. How is it that we have concrete, framing, doors, windows, roofing, hardware and everything else required - but we have a problem with the simplest of products - GIB Board?" he said.

"We welcome the Commerce Commission enquiry into building suppliers. Something has to happen, because the status quo is so bad," he said.

Simplicity Living is happy to make its contacts, processes and information available to anyone who wishes to import plasterboard directly.